Shameless: Dad Leaves Daughter To Defend Herself From Pitbull

You See The Pain In His Eyes: Father Of Six-Year-Old Who Shot Herself In Court 

This Is What War Looks Like: Russian Tank Squashes Ukrainian Car

Who Arrests People Like This: Ghanaian Musician back in police grip with fresh charges to be pressed

What Was He Thinking?: Man Squashed By Semi-Trailer Trying To Protect His Car 

Who Arrests People Like This: Ghanaian Musician back in police grip with fresh charges to be pressed 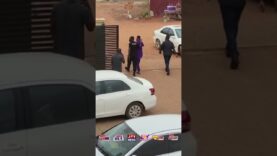 Afrobeats star, Kelvynboy, has been arrested for the second time this year.

His re-arrest results from alleged abuse of his baby mama, with whom he has two kids.

On February 22, the Adentan Circuit Court 2, presided over by Sedinam Awo Balokah, granted the singer, known in real life as Kelvyn Brown, a ¢200,000 bail.

He was scheduled to reappear before the court on March 18.

At the second hearing, the court dismissed the case for lack of evidence.

Meanwhile, the prosecutor has presented fresh allegations to the judge, saying Kelvynboy had assaulted his alleged baby mama again after being granted bail in February.

The judge, Mrs. Balokah, after learning of the fresh allegations without an official filing of the case, adjourned hearing to another date.

Eventually, the singer, who was seen walking towards his team’s car, was re-arrested.

Kelvynboy has not been put before court on the fresh charges, leaving the police to decide whether to grant him police inquiry bail or not. “The down flat” singer may spend this weekend in police cells and be arraigned on Monday.