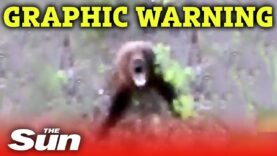 This is the horrifying moment a bear charges at a man in a forest and mauls him after he sneaked up on the animal and kicked it. The lone ‘daredevil’ – who has not been identified – filmed himself stalking the young brown bear through secluded woodland in the Kamchatka region of Russia’s Far East before kicking it in the back, Sputnik reports. The bewildered animal – apparently unaware he was there – responded by roaring at the man, launching at him and biting his hand. The bear ran away immediately after the attack and the man could be heard complaining in disbelief: “It bit through my hand.” The shocking video went viral on the encrypted Telegram messaging app earlier this week, according to Ukraine-based media outlet Apostrophe. It is unknown when the incident occurred. The local forestry agency confirmed it is aware of the video and is investigating.