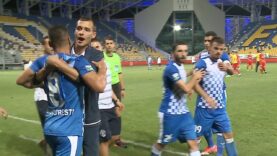 George Călințaru, an attacker playing for Juventus Bucureşti in the Romanian Liga I, fluffed his lines with the last kick of the game on Saturday. Juventus were awarded a penalty for handball, beyond the four minutes of additional time in their game with Steaua Bucharest. Călințaru stepped up and panenkaed the ball right into the arms of the grateful keeper, before being confronted by several angry team-mates