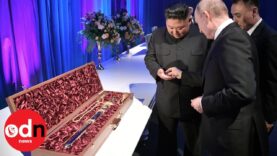 Russian President Vladimir Putin and North Korean leader Kim Jong Un have attended a dinner following their much-anticipated summit. The Russia President presented Kim with a tea set. In return, Putin was gifted with a ceremonial sword. Putin and Kim said they had good talks about their joint efforts to resolve a standoff over Pyongyang’s nuclear program, amid stalled negotiations with the United States. Kim’s first trip to Russia comes about two months after his second summit with US President Donald Trump failed because of disputes over US-led sanctions on the North. Putin meanwhile wants to expand Russia’s clout in the region and get more leverage with Washington.