Nature Has No Mercy At All: Crocodile Catches Cheetah 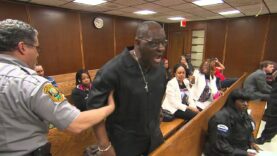 Miami-Dade County Criminal Court, April 4, 2014. Hearing in the murder trial of Lukace Kendle for the shooting of Kijuan Byrd. Byrd’s father, Donald, is escorted out of the courtroom after an outburst. Excerpt from an investigation by The Center for Investigative Reporting and CNN. Credits: CIR reporter Shoshana Walter, CNN senior investigative producer Scott Zamost, footage courtesy of CNN For more on this story, visit www.cironline.org and cnn.com​. Correction: A previous version of this video had the incorrect date for this hearing. It occurred April 4, 2014.